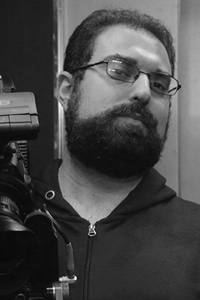 Daniele Misischia was born on February 13th of 1985.

In 2006/2007, after following classic studies, he attended a directing and screenwriting course by l’Accademia di Cinema and Televisione Griffith.

He immediately begins to produce a series of genre short films with an artisanal and amateur nature.

In 2008/2009 he follows a screenwriter course by the Nuct at Cinecittà.

In the years he meets friends and colleagues with whom collaborates at various projects, producing short films of a more professional nature, always moving in the “genre” cinema.

The “genre” cinema has always been his greatest passion. In the years Misischia develops capacity that allow him to stage various genre of the cinema like: horror, action, thriller and noir without getting demoralised by the low budget.

In the upcoming years he produced a long series of short and feature independent films that found appeal in the festivals and online.

In 2013 he starts working with Manetti Bros. as a mdp operator and director of second unit in the series Il Commissario Rex 7 and 8 and L’Ispettore Colorado Season 5.

In 2016 he starts to film his first work The end? L’inferno fuori (first film with a real production behind him), a zombie movie produced by Mompracem and Rai Cinema, realised in summer 2018.